Military boots are the oldest footwear for soldiers, older than the sandals of the Roman legions or the Egyptians. In ancient times, boots were not only useful but also cost a fortune. For example, in Russia, the presence of these boots on a soldier meant that he was very rich. 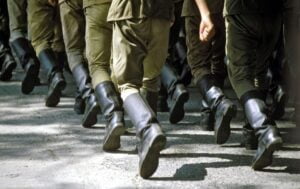 Boots became part of the appearance and extensive military uniform of the cavalry. The wide trousers worn at the time could ruin a horse stirrup and catch the saddle, so riders wore tall, tight shoes for calves. It was convenient to lift it on the horse and have it on the stammer for a stylish look. Tall cuffs protected the legs to the knees from thorny vegetation and the coolness of the rider. In the 20th century, the role of the cavalry gradually diminished, but high boots continued to be used in the armies of various countries. Thus, even with the complete loss of horsemen from the battlefield, Kirzovye boots continued to serve in many countries, including the Soviet Union and China. Military boots have long been used by firefighters because of the need for protective knee boots. Today they have been replaced by regular patellas.

Kirza was an essential material in Soviet military footwear, as it allowed for inexpensive and easy construction of skin replacements. Today, many manuals want to buy Kirz boots because they are very practical and inexpensive footwear. Kirza’s material is made of a cotton substrate impregnated with polyvinyl chloride impregnation. The chrome-plated boots for officers were made with thin skin and a thinner silhouette. The middle section was Jalovy boots (cow skin) and “Russian Leather“. The latter was a bit tougher, but in contrast to the Kirzovy boots, they were still made of real skin. With these seemingly simple boots, the Soviet army won the Great Patriotic War and participated in all conflicts around the world. And today, the boots are still going strong.